This post may contain affiliate links. I receive a small commission at no cost to you when you make a purchase using my link. As an Amazon Associate, I earn from qualifying purchases. This site also accepts sponsored content
Jump to Recipe Print Recipe

Since we have been watching how we eat and trying to eat healthier, we have been trying to make healthier versions of some of our favorites. Don always says I make the Best Apple Pie in the World, and while I happen to agree, my waistline is saying I need to revamp the recipe. When I started making this low sugar apple pie, I wasn’t setting out to make a diet pie. I wanted to make a healthy apple pie that we didn’t have to feel guilty about eating. I like to say this is my Weight Watchers Apple Pie. It works as a Diabetic Apple Pie because it is a low sugar apple pie.

Is this the Weight Watchers Apple Crisp Recipe

No. While I am sure the apple crisp recipe is delicious, it isn’t the type of apple pie I wanted to make. I wanted the traditional crust on top and crust on bottom apple pie. I haven’t made the Weight Watchers Crisp recipe but it is on my list of things to make. With how much Don love apple ANYTHING, we will get around to making it.

How is this a Healthy Pie Crust

When I think of apple pie I want a top crust and a bottom crust. I want it to be sweet and delicious. The problem with most apple pies, besides the amount of sugar in them, is the crust. There is A LOT of butter in a regular pie crust. When I make this healthy apple pie, I need a healthy pie crust or else I can’t have it. I need the crust people. So the secret to the healthy pie crust is the 2 ingredient dough! If you have never had 2 ingredient dough, you are in for a surprise.

What is 2 Ingredient Dough

2 ingredient dough it dough made from 2 ingredients. It is simply self-rising flour and Greek yogurt. And I promise you, you can NOT taste the yogurt. Hubby HATES yogurt and we make this dough all the time. We make it for Weight Watchers Pepperoni Pizza, Breadsticks, WW Air Fryer Funnel Cake Bites and Homemade Pop Tarts.

Now, because it is a healthy pie crust for this pie, it isn’t going to be as flaky and airy as a traditional pie crust. The butter does that and since we are avoiding that with this recipe, there is a small difference.

That kind of goes with the diet pie crust. While there isn’t actually anything that makes this a diet pie crust because we are eliminating the unhealthy butter. Does it taste amazing and taste like a real apple pie. YEP. You really do have to try it to believe it.

I also make a delicious Skinny Easy Strawberry Pie that is A -Maz -Ing!

I see a lot of Weight Watchers Apple Crisp recipes. While I love a good apple crisp, it isn’t apple pie to me. I need the whole thing. I want the crust and the apples and the flavors. So this Weight Watchers Apple Pie is actually only 5 Weight Watchers Points if you use real brown sugar and real granulated sugar. However, if you use a sugar substitute and a brown sugar substitute, this Healthy Apple Pie comes in at only 2 points! A traditional apple pie is 16 points PER serving. WHAT? That is crazy. And to think I have seen hubby sit down and eat half a pie by himself.

Get the full list of ingredients, with measurements, and step by step directions at the bottom of the post in the printable recipe card.

How to Make The Best Apple Pie in the World

Preheat the oven to 375 degrees

Make the 2 Ingredient dough. Divide it into 2. Roll each piece into a pie crust. Grease your pie plate.

Add one to the bottom of your pie and save the other for the top.

In a mixing bowl combine the apples with the lemon juice. This prevents the apples from browning.

Add the apple mixture to the pie plate over the crust.

Top with the other pie crust and seal the edges. Make a few cuts in the center to let the steam out of the pie.

Brush the pie crust with egg wash. This creates a beautiful golden crust. 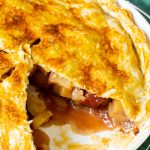