I received the Playmation Marvel Avengers Starter Pack for review. All thoughts are my own.

We LOVE the Avengers here. So when I heard about Playmation and their Marvel Avengers Starter Pack, I knew it would be a hit. What I didn’t know was just how cool it would be. Playmation takes digital play and gets physical with it and brings imagination into play. The products are interconnected with embedded content that lets players step into the world of the Avengers, simply by using the wearable gear.

The Playmation Marvel Avengers Starter Pack has everything you need to start playing and to carry out the first missions while fighting alongside the Avengers in the battle to defend Earth from Ultron!. The starter pack comes with 4 locations and 25 missions that can be played right out of the box. 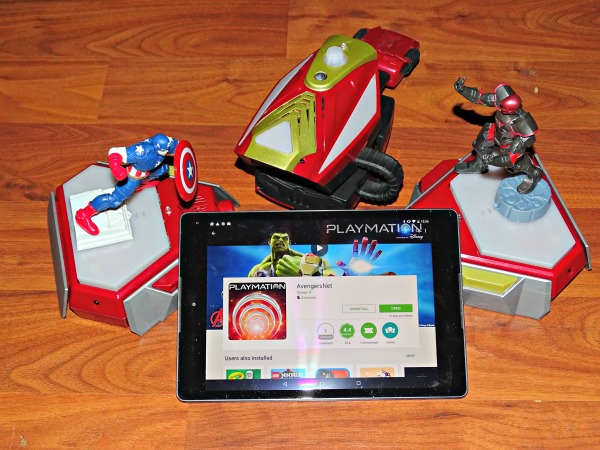 (Tablet is not included)

The Iron Man inspired Repulsor Gear has motion sensing technology that puts players right into the Avenger action. Simply strap on the gear and the being the battle. There are 3 different blast modes, blocking, dodging, sneaking, running, and more. The power activators bring the missions to like, with 20 different enemies.

The Playmation Marvel Avengers Starter Pack includes the Repulsor Gear, 2 Power Activators, 2 Smart Figures, instructions, and 25 embedded missions. Additional missions are available for download and can be with the AvengersNet app.