This post may contain affiliate links. I receive a small commission at no cost to you when you make a purchase using my link. As an Amazon Associate, I earn from qualifying purchases. This site also accepts sponsored content
Jump to Recipe Print Recipe

Do you love eating dessert, but want it healthy as well? This Keto Cinnamon Rolls Recipe with Pecan is going to be a game changer. This recipe may become a favorite in your household and is a great dish to share with your family and friends.

Make this recipe for any occasion and be the talk of the party with this healthy treat. This Keto Pecan Cinnamon Roll Recipe is a deliciously sweet and nutty dessert. The best part is it won’t set you off track. You will stay in ketosis and enjoy your special treat.

What Flour is Best for Keto Baking?

Some of the best flours you can use for this recipe is almond or coconut flour. These types of flours work great, but they are not interchangeable per say because the different rations you need to use. So, you best choice would be to use almond flour which is what this recipe uses.

Do These Keto Cinnamon Rolls Have Icing?

This recipe does call for a delicious icing for your cinnamon rolls. You can’t have cinnamon rolls without the signature glaze. The icing in this recipe is very easy to make and only uses a few ingredients. The ingredients are vanilla bean paste, heavy whipping cream and cream cheese. Simple and delicious.

How to Make Keto Cinnamon Rolls Recipe with Pecan

Mix together your almond flour and baking soda in a small bowl and set aside.

Melt the mozzarella and cream cheese in a microwave safe bowl for 30 second duration until its completely melted, while stirring after each 30 second bursts. Then, use a fork to stir in the egg.

Slowly add in your dry ingredients with the same fork until you can no longer mix it further. Then, using your hands take the mixture from the bowl and roll together until a clean ball of dough forms.

Using plastic wrap, wrap the dough and chill for 30 mins. Take out the dough from the fridge and set the dough between two silicone mats or parchment paper. Be sure to spray with coconut oil before adding the dough and roll the ball of dough into a rectangle.

Mix together the cinnamon and erythritol in a small bowl. Using a silicone brush, brush the butter onto the dough and shake some of the cinnamon mixture on top and pecans as well.

Roll your dough into a tight log. Using the cling wrap to keep the dough in place. Slice the dough into 6-8 pieces and approximately 1.5-2″ thickness. Place the rolls on your pan and arrange them to not stick together and bake for 12-15 minutes or until a light brown. Due to the varying temperatures of ovens, be sure to check in on your rolls every 10 minutes until they are done.

Using a whisk, combine the cream cheese, heavy cream and powdered erythritol in a small bowl and mix until smooth. Now, spread evenly across your rolls and Dig in! 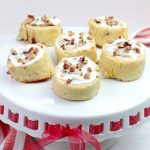 Do you love eating dessert, but want it healthy as well? This Keto Pecan Cinnamon Rolls Recipe is going to be a game changer. This recipe may become a favorite in your household and is a great dish to share with your family and friends.
Prep Time1 hr 30 mins
Cook Time15 mins
Course: Dessert
Cuisine: American
Keyword: keto cinnamon rolls
Servings: 8
Author: Our Wabi Sabi Life